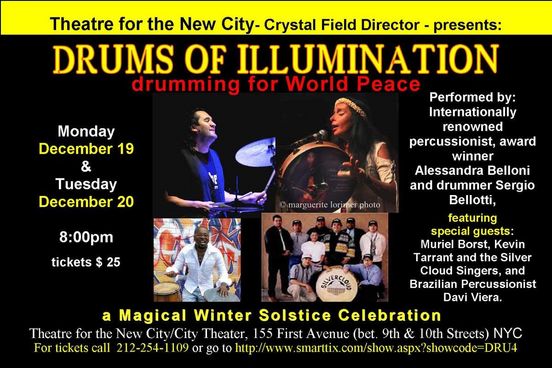 In "Drums of Illumination" Alessandra Belloni unites four great cultures: the powerful African, Native American, the fiery Brazilian, and the passionate Southern Italian, for a  journey back in time into a world of ritual drumming, voice and trance dances.

Artistic Director Alessandra Belloni has gathered a remarkable group of percussionist/vocalists/dancers for "Drums of Illumination," noting that its purpose is "to invoke World Peace, thus showing that we are all one following the beat: the pow wow drum, the Italian tambourine, the Brazilian pandeiro or timbale, and the drum set.   All will send good vibrations in to the air as a collective ritual of purification."

Outfitted with an extensive complement of exotic percussion instruments, and both Remo Artists, tambourine virtuoso Alessandra Belloni and drummer Sergio Bellotti (drum teacher at Berklee School of Music in Boston), both from Southern Italy, have enjoyed a long collaboration celebrating and exploring the rhythmic similarities between Southern Italian and other cultures by blending various percussion instruments. With music both ancient and new, Belloni and Bellotti create a bridge between ancient rituals and modern rhythms into a vibrant musical tapestry.

The evening's repertory will include:

Tarantellas from Southern Italy, including the authentic Pizzica Tarantata, healing trance dance from Puglia used as an exorcism to cure the mythical bite of the tarantula

Tarantellas used as music therapy and exorcism, dating back to the ancient Greek rites of Dyonisus

Healing chants and drumming in honor of the Black Madonna

Original songs to honor the Goddess of Love and the Sea, written by Belloni

Davi Vieira, percussionist/songwriter/vocalist, and 10-year member of the off-Broadway show  "Stomp."  The native of Salvador-Bahia, Brazil has performed, recorded, and toured with a great variety of artists including David Byrne, Wyclef Jean and Bebel Gilberto.   Vieira will play the songs and rhythms performed in Brazil as purification rites to honor the sea goddess and goddess of the river.

Murielle Borst, Artistic Director of The SilverCloud Singers and Dancers, also distinguished herself in her one-woman show "More Than Feathers and Beads," which was nominated for a Rockefeller grant and selected to participate in the Global Indigenous Theater Festival in Sydney Australia, as well as several venues in NYC.   She has completed six books in her fantasy series, "The Star Song Carriers."   Borst and Belloni, "soul sisters" who share the same energy and spiritual beliefs, first collaborated in 1992 on I Giullari di Piazza's "Earth, Sun and Moon," commissioned by Lincoln Center and performed for years in NYC and on tour.

The SilverCloud Singers and Dancers is an intertribal Native American troup weaving  the traditional with the contemporary Native American song and dance.   Founded in 1991, the company is named in tribute to Josephine Mofsie Tarrant, mother of the founding directors.   The singers come from many tribes, and many parts of the U.S. and Canada.   They have appeared in numerous Pow-Wows across the continent as well as in tours to Europe.

Sergio Bellotti moved from the south of Italy to the US in 1995 and since 2002 has taught drum set at Berklee College of Music in Boston.   Active in the Boston music scene, Bellotti currently plays with fusion ensemble Spajazzy, co-leads a duo with Alessandra Belloni and performs weekly with WeJazzUp! and with many other local musicians and visiting artists.  Sergio is a regular visiting artist  at the GM Drum School in Torino and the Conservatorio Della Svizzera Italiana in Lugano Switzerland.

Amazing stilt dancer Mark Mindek will represent the Sun, the Moon, the Angel of Death, and bringer of Light the Archangel Gabriel - all on stilts, in traditional Southern Italian style.   Mindek, a longtime member of I Giullari di Piazza, is engaged for special events around the world, and has also been seen towering over singers in several productions at the Metropolitan Opera.

Don Hackman, writing in the Los Angeles Times, found that "Alessandra Belloni and Tarantata: Dance of the Ancient Spider" is a revelation, utterly fascinating"

Jon Pareles of The New York Times, reviewing an I Giullari di Piazza show, remarked that "Ms. Belloni sang in an exultant voice.   The songs blazed with an age-old momentum."