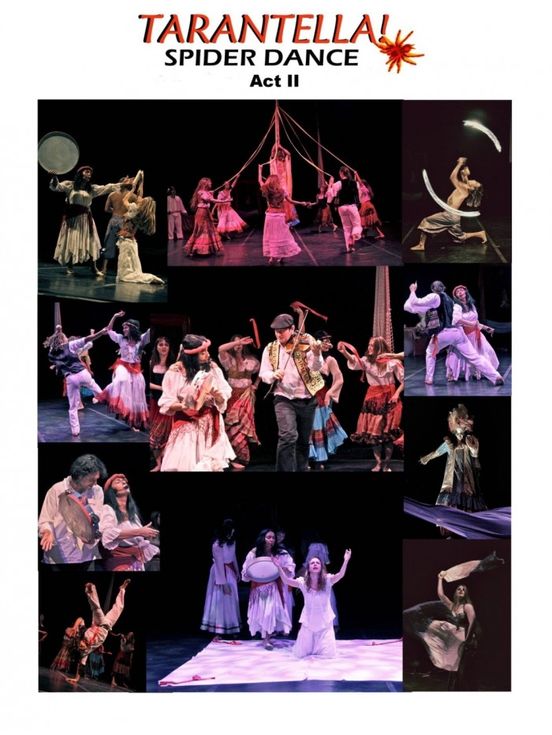 Alessandra Belloni’s ensemble, I Giullari di Piazza, performed her one-of-a-kind, show Tarantella: Spider Dance at the Theatre for the New City where she sharpened its impact over the past few years. This is a richly beautiful and exciting show that combines music, dance, copoeira, circus, acrobatics and mythical drama all swirled into a lively, colorful show, seasoned liberally with sex and sensuality. 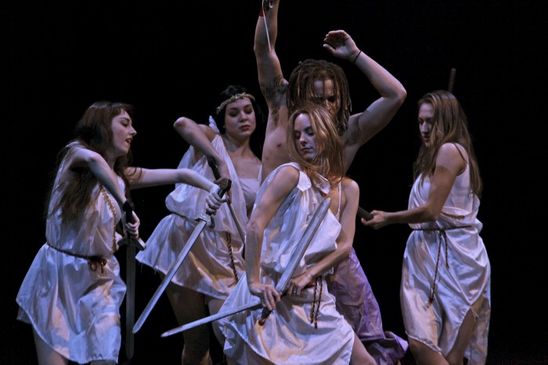 This is theater at its best—raw, passionate, richly costumed and delightfully ragged—that has to be seen to fully appreciate the full-bodied wit and passion with which Ms. Belloni tells her tale. Folklore and classical Greek myth intertwine freely in Spider Dance. The myth of Aracne winning a weaving contest against the vengeful goddess Athena is central to Spider Dance. Aracne is transformed into a spider destined to spin webs forever, portrayed by a skilled acrobat twisting and turning with abandon high up on a hanging web, keeping the spider symbol ever present.

The robust cast breaks into energetic tarentellas between colorful tales of clandestined lovers and Dionysus seducing lustfully frustrated peasant girls. Early Christianity is conflated with paganism through rich imagery of madonnas, exorcisms, crucifixes, mingling with nature and sex. Gypsies sweep around the stage; fiery lamps are swung in elaborately dangerous circles; lovers couple with abandon after being bitten by the tarantula whose poison causes madness; and men fight with graceful sweeping movements. 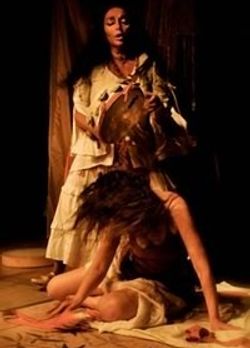 The "Spider Dance" or Tarantella, is a quite erotic trance dance ritual from Southern Italy, which has been used to cure the mythical bite of the tarantula. This new 'Spider Dance' production infuses the ancient melodies and instrumentation of the authentic tarantella with modern electronic dance beats. It features aerial, fire and stilt dancers, acrobats and a techno Tarantella trance dance. As with all of Belloni's presentations, the show is meticulously researched, with costumes and instrumentation as authentic as possible. The music ranges from traditional 6/8 southern Italian to 12/8 heavy-accented modern sounds, and includes tarantellas, sensual love songs, and women's work chants. 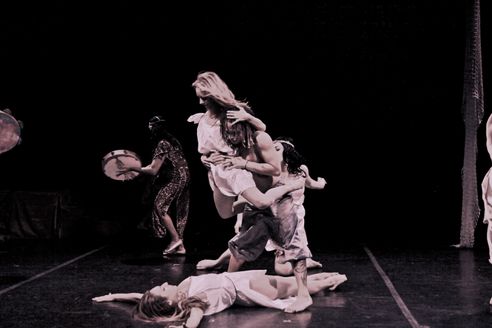 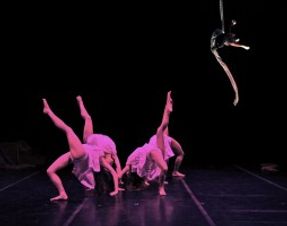 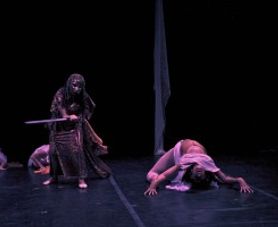 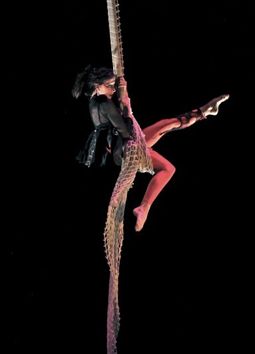 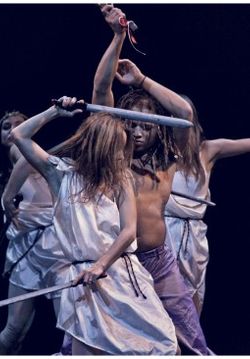 The show also relates the dual journeys of Athena and Arianna, who both suffer from tarantismo, transmitted from the bite of the spider Arachne. Athena's drumming induces a trance dance and reveals the age-old myth of Arachne and birth of the spider woman. Arianna gains insight of her own madness and suicidal mania and actively seeks a cure. The shaman's drumming and Dioniso's ecstatic dancing lead Arianna to New York and Brazil, where she encounters The Common threads of universal rhythms and traditional cures through music and dance. Arianna and Athena re-unite in a cross-cultural celebration of healing which allows her finally to truly love.

As with all of Belloni's presentations, the show is meticulously researched, with costumes and instrumentation as authentic as possible. The music ranges from traditional 6/8 southern Italian to 12/8 heavy-accented modern sounds, and includes tarantellas, sensual love songs, and women's work chants. Instrumentation is both traditional and modern. Traditional instruments include Renaissance folk guitar, mandolin, accordion, viella, frame drums, tambourines, frame drums and dumbeck. Electric violin and guitar, and techno beats have been added to the more modern music segments.

Featured in the cast are: