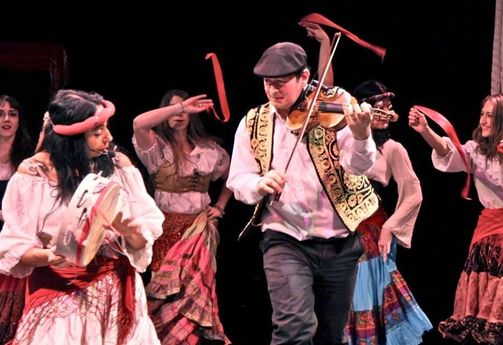 Alessandra Belloni founded  I Giullari Di Piazza with classical guitarist/Composer John La Barbera in 1979, and is now artist in residence at the cathedral of St. John the Divine.

I Giullari di Piazza, New York's Southern Italian folk music/dance/theater company now in its 31th year, presents a program of ecstatic dances, musical exorcisms, and the tarantella trance dance.  The program includes excerpts from the company's production “Tarantella - Spider Dance” which feature the wild erotic dance ritual (pizzica tarantata) from Southern Italy used to cure the mythical bite of the tarantula (“the bite of love”). This ancient healing trance dance and exorcism was used to cure a mental disorder called tarantismo, which afflicted mainly women, who felt stuck in the spider web of their society. The program also includes the tarantella delle streghe (witches' dance) from the Renaissance; the medieval danza della morte, the spinning dance of death performed on stilts; powerful ritual drumming and healing chants in honor of the Black Madonna; lullabies; love ballads; and original songs by Alessandra Belloni and John La Barbera, the group's co-founders and directors.

I Giullari di Piazza (The Jesters of the Square) is celebrating its 30th anniversary.  Devoted to presenting authentic Southern Italian music/dance/theater dating back to the 13th century, the group also creates new musical and theatrical works based on folk music and dance, ritual theater, and Commedia Dell' Arte. The group's founders spent many years researching the songs, dances and ritual chants of southern Italy. The Italian-born Alessandra Belloni, called a “Mediterranean volcano,” is regarded as an important voice in traditional southern Italian music and dance today. She is the only woman in the US and in Italy who specializes in traditional Southern Italian folk dances and percussion that she learned from tradition bearers in Southern Italy. For over 20 years she participated in drumming festivals in remote areas of Southern Italy, held as rituals of purification in honor of the Black Madonna. She was voted as one of the top percussionists in the worldbeat category by Drum magazine and has toured worldwide, appearing at major festivals and venues.

John La Barbera is an award-winning composer and recognized as one of the first transcribers of Southern Italian folk music in America. The composer of original folk operas for I Giullari di Piazza, he has also written works for such documentary films as Sacco and Vanzetti (2007) and the Academy Award-nominated Children of Fate (1992).

I Giullari de Piazza spent ten years in residence at the Center for Italian Studies at New York University, and has been artist-in-residence for 15 years at the Cathedral of St. John the Divine. The group's acclaimed productions include Tarantella - Spider Dance; Stabat Mater: Donna de Paradiso, the Easter Opera; The Dance of the Ancient Spider, a trip into the world of exorcisms; The Voyage of the Black Madonna, depicting Virgil's trip around the world in search of the Black Madonna; The Adventures of Don Giovanni and His Servant Pulcinella, performed in commedia dell'arte style; and La Cantata dei Pastori, the humorous Christmas show that was performed as it has been for hundreds of years in street presentations in Naples.

The company has toured Italy and the US, appearing at such venues as Lincoln Center, Carnegie Hall, the Caramoor Center for Music and the Arts, Madison Square Garden, the Smithsonian Institute, the Metropolitan Museum, Giants Stadium, and the Cleveland Museum of Art. It was featured in Spider Sex, a National Geographic documentary on spiders in which the group performed an authentic tarantella as a healing trance ritual.  The company can be heard on many recordings, includingTarantelle e Canti d'Amore (Naxos World) and Tarantata: The Dance of the Ancient Spider (Sounds True), which was named one of the best world music CDs of the year (2002) in the New York Times and the Los Angeles Times.

"The Dance of the Ancient Spider"
premiered at Alice Tully Hall, Lincoln Center

Alessandra has written, directed, choreographed, and performed the folk operas:

"The Voyage of the Black Madonna"
(Cathedral of St. John the Divine)

"The Adventures of Don Giovanni & his Servant Pulcinella"
(Carnegie Hall )

The Voyage of the Black Madonna

This production comprised of a multi-cultural cast. These performances draw parallels between the cultural and musical traditions of Southern Italy with those of Africa, and Latin and Native America. These rituals date back to the ancient cult of the Mother Earth Goddess. We believe that through this unique theatrical experience we can bring different races together and help save humanity from self-destruction. As artists we feel that our work must grow and be dedicated to the most important issues of our age and society. To expand our audience and to convey this message we have reached one of the most visible spaces in New York, The Cathedral of St. John the Divine. In this location we have drawn audiences from the Hispanic and African-American Communities of the neighborhood as well as our regular Italian-American audience.

The production premiered to a wide audience and critical acclaim during Easter season of 1995 at the Cathedral of St. John the Divine. In the Italian and Spanish traditions, Passion Plays are represented during Easter, as ritual drama in the form of procession with traditional music and costumes, with actors and statues playing the roles of Mary and Jesus. With its procession of penitents, stations of the cross, ritual music, dance and drama, the “Stabat Mater” provided people of Italian and Hispanic descent, as well the general public, with a meaningful celebration of life and of the Mother.