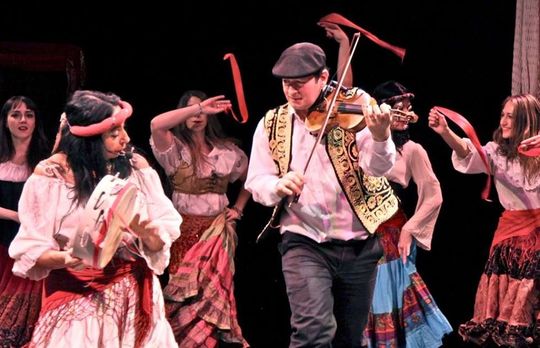 the show TARANTELLE E CANTI D'AMORE presented to a sold out audience at Symphony Space in October 2009.

This concert is a fiery "journey" through the South of Italy featuring also magic rituals,  sensual mystical trance dances performed as ritual by the women of Southern Italy, haunting love songs,  lullabies, processional chants and ritual drumming in honor of the Black Madonna, known as :Tammorriata, and more dances as well as original songs by Alessandra Belloni inspired by the rituals and rhythms of Brazil..

The music comes from different regions of Italy, mainly Naples, Calabria, Sicily, Puglia and Sardegna, and it has been arranged with a very unique World Music Sound.

The performance ends with the authentic Pizzzica Tarantata, the healing trance dance from Puglia used as an exorcism to cure the mythical bite of the tarantula, a mental disorder that afflicted mainly women, and which goes back to the ancient Greek rites of Dyonisus.

At the end of our concert we invite the audience to dance the tarantella or “pizzica” in a celebration of life and good energy unique of the Italians using red ribbons in a circle. 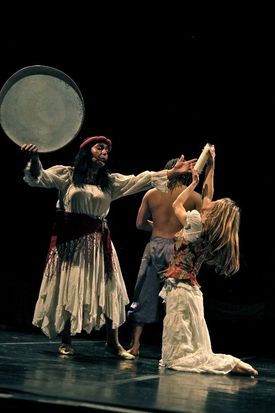 This was the start of the myth of the Tarantula and the beginning of the ritualistic healing power of the tarantella dance as explained and presented to us by the energetic and charismatic Belloni, accompanied by actor Randy Vasquez as the voice of Dionysus.

Made up of local and international artists, the I Giullari Di Piazza Dancers performed the very intricate and sometimes hypnotic pieces with passion, including the mesmerizing Francesca Silvano who along with Peter DiGeronimo were featured in most of the dance segments throughout the evening.

Headed by singer Vida Vierra and the wonderful dancer Dani Lunn, this show stopping number capped off an evening of dance, myth, history and spiritual healing at the hands of the incomparable Alessandra Belloni.

With her compelling stage presence, throaty mezzo, and raging tambourine, Allessandra Belloni is a force of nature. Through Southern Italian folk music, chant, and dance, Belloni and her company explored the sound and movement world of tarantella trance dancing at Disney Hall’s Redcat.

Belloni’s virtuosity on the tambourine is without question. Along with traditional instruments played onstage by an ensemble of musicians, her music director, Joe Deninzon adds modern electronic dance beats. 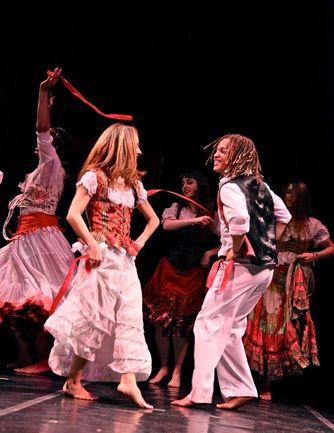 Don Hackman, writing in the Los Angeles Times, found that "Alessandra Belloni and "Tarantata: Dance of the Ancient Spider" is a revelation, utterly fascinating."

Jon Pareles of The New York Times, reviewing an I Giullari di Piazza show, remarked that "Ms. Belloni sang in an exultant voice. The songs blazed with an age-old momentum."