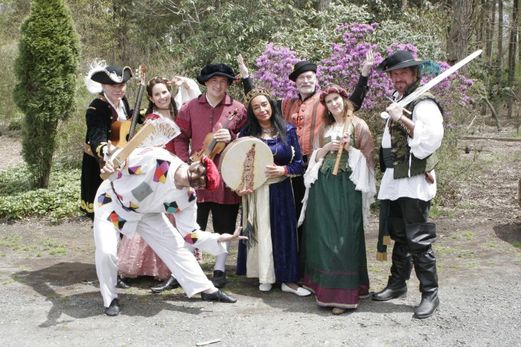 JOHN LA BARBERA: Musical Director, is a composer, arranger, guitarist, mandolinist, and author whose expertise in Italian traditional music has made him a valuable resource for both film and theater directors. His music reflects his extensive research in traditional music presented in an expressive musical language that has influences from classical music to jazz. Awarded for his extraordinary role in the transmission and translation of Italian oral traditions from The Italian Oral History Institute, La Barbera is recognized as a pioneer in reviving Southern Italian folk music and one of the first transcribers of it in America.  He is the author of the first and foremost Italian mandolin book Traditional Southern Italian Mandolin and Fiddle Tunes, and Italian Folk Music For Mandolin with Mel Bay Publications and currently on their best sellers list.

La Barbera has received several composing awards, grants and commissions, including a commission in 1996 from Lincoln Center for the Performing Arts in New York, and The Martin Gruss Foundation and I Giullari di Piazza to compose The Dance of the Ancient Spider, which premiered in Alice Tully Hall. In 1998 through I Giullari di Piazza, he received a composing grant from The New York State Council on The Arts to compose a sacred opera “Stabat Mater, Donna di Paradiso” which premiered at The Cathedral of St. John the Divine in New York City. From the Jerome Foundation he was commissioned to write a work for the ETHOS Percussion ensemble called The Marimba’Ba Suite for percussion, which premiered in 2001 and released on their CD Sol Tunnels. He has received funding from Meet The Composer, the annual ASCAP composing award and was a finalist with his song “Sun Goes Down” in the Jazz category of the John Lennon Songwriting Competition.

As a film composer, his film scores include the Academy Award Nominated feature documentary: Children of Fate  (1992) nominated for best Documentary feature in the 1994 Academy Awards and winner of the 1993 Sundance Film Festival; Finding The Motherload: Italian Immigrants in California, (2014) directed by Gianfranco Norelli and Suma Kurien; Sister Italy (2013) directed by Angelo Buonsignore; Sacco and Vanzetti (2006) by director/producer Peter Miller and Florentine films, won the 2007 John E. O’Connor Film award, the annual prize for the best historical film awarded by the American Historical Association; Pane Amaro (2006) by Gianfranco Norelli and Eurus Productions for RAI-National Italian TV network, won critical acclaim in both Italy and the U.S.; What’s Up Scarlet? (2005) directed by Antonio Caldarella, produced by open City films and Big Time Picture Company; Tarantella, (1995) starring Mira Sorvino and La Festa (1995), produced by NJTV for PBS. He appears together with legendary singer Jimmy Roselli in the Italian and American film about the Neapolitan song, Neapolitan Heart- Cuore Napolitano (2002) by Italian film director Paolo Santoni.

The Marimbaba Suite- for percussion quartet and Danza del Fuego- for solo marimba, both published with Bachovich Music Publications, 2009;

He teaches at the Bergen Community College in Paramus, New Jersey and has taught at The Julius Hartt School of Music (University of Hartford); The Guitar Study Center of the New School in N.Y.; Sessione Sienese in Siena, Italy; SASI in Bratislava, Slovakia; and SESC in Sao Paulo, Brazil.

He is an artist in residence, since 1994, at the Caramoor Center for Music and the Arts in Katonah, New York with the educational program on Italian renaissance music and composer for their “What’s in a House” series for young students.

He holds a M.M. in Jazz Studies and Arranging at William Paterson University (N.J.); B.M. in Classical Guitar from the Hartt School of Music, (Univ.of Hartford), graduate studies at Hunter College (NYC) in ethnomusicology; Villa Schifanoia (Rosary College), in Florence: and the film music seminar with film composer, Ennio Morricone at the Academia Chigiana in Siena, Italy. 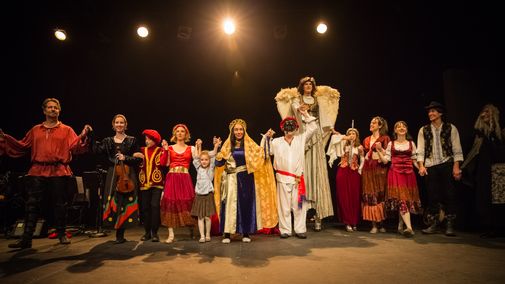 JOE DENINZON: Assistant Musical Director,  has been hailed by critics as “The Jimi Hendrix of the Violin”, because of his innovative style on the electric seven-string violin and his compositions combining jazz and rock with Gypsy influences. A musician who transcends many genres, he has worked with Sheryl Crow, Bruce Springsteen, Phoebe Snow, Everclear, Ritchie Blackmore of Deep Purple, Smokey Robinson, Aretha Franklin, Robert Bonfiglio, and Les Paul among many others. He has also performed as a solo electric violinist with the New York City Ballet for Richard Einhorn’s “Red Angels.” Joe is the lead singer and violinist for the band, Stratospheerius (www.stratospheerius.com), who have just released their fifth CD, “The Next World,” on Steve Vai’s Digital Nations label. The CD was nominated for “Best Progressive Rock Album of 2012 bywww.progressiverockcentral.com and the band was named “Best Jam Band” in the Musician’s Atlas Independent Music Awards. Joe can be heard on over a hundred CD’s and jingles as a violinist and string arranger, most recently on a NIKE commercial for the 2012 Olympics. A 14-time BMI Jazz Composer’s grant recipient and a winner of the John Lennon Songwriting Contest, his original music has been featured on CMT, MTV VH1, Comedy Central, National Geographic, the Travel Channel, the History Channel, and the Will Ferrell/Adam McKay-produced film “Virginity Hit”. Joe has released a CD with his Acoustic Jazz Trio featuring guitarist Steve Benson and bassist Bob Bowen, entitled “Exuberance”.

He is also a member of the Sweet Plantain String Quartet (www.sweetplantain.com), which combines classical, jazz, hip-hop, and Latin styles. As an educator, Joe has taught rock violin at Mark Oconnor’s String Camp and Mark Wood’s Rock Orchestra Camp, and made repeated appearances performing at the Grand Canyon Music Festival, where he co-founded the Grand Canyon School of Rock. He has recently published a book on electric violin techniques for Mel Bay Publications, entitled “Plugging In.” A recent book, titled “Discovering Rock Violin” by Chris Haigh, lists one of Joe’s recorded solos among the “top 20 greatest rock violin solos of all time.” Joe holds Bachelor’s degrees in Violin Performance and Jazz Violin from Indiana University and a Master’s in Jazz/Commercial violin from Manhattan School of Music.

She can be seen on MTV in the Aerosmith video “Unplugged” which has been airing for the past 12 years.  As a recording artist she can be heard on dozens of soundtracks for movies and television playing a variety of ethnic instruments.  Since 1985 Susan has been performing Italian folk music with “I Giullari di Piazza”, and has been artist in residence with them at the Cathedral of St. John the Divine in NYC.  She has also recorded several CDs and a documentary with them.  Since 1992 she has also been an Artist-in-Residence at Caramoor Center for Music and the Arts where she and other members of I Giullari di Piazza perform and teach Renaissance music.

MARK MINDEK is a graduate of the Hartford Conservatory, is a dancer and choreographer in New York City. He works in dance styles ranging from modern to jazz, Renaissance and Baroque and has toured both nationally and Internationally thanks to his work with , I Giullari di Piazza, Alice Farley Dance Theater, New York Historical Dance Company, Court Dance Company of New York and others. He performed in the Bessie Award winning production of "Black Water" at La Mama etc, and created the role of "Tower" in Alice Farley's EROTEC at the New York Public Theater. With Coralie Romanyshyn, he co-directs Friends in High Places, a touring company that performs ballroom dance and classical ballet in a very unusual way - on stilts. Mark is currently performing in New York at the Metropolitan Opera in their production of the Magic Flute, directed by Julie Tamor.   He can also be seen in the movie "Enchanted" by Disney Pictures.

FRANCESCA SILVANO is a graduate of the National Academy of Dance in her native Rome, Italy. After studying at the Covent Garden School of London, she received a scholarship at the Ailey School, reason for her to move to New York. Francesca is now also a teacher and choreographer as well as the proud mother of her little boy Luca. She would like to thank her family for all of the help and support provided, the cast for the wonderful artistry, and above all Alessandra, for showing her the light of the Taranta.