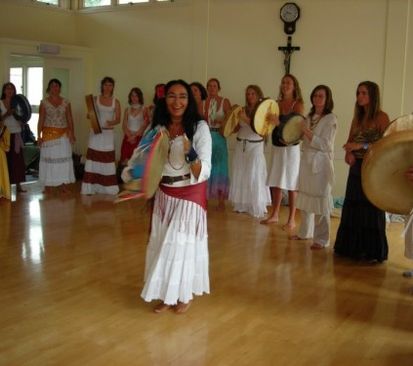 This workshop will focus on the tarantella fast 6/8 rhythms and its many variations. Alessandra will also teach chants and songs, sung as devotion to the Black Madonna (Montevergine near Naples the Sun (Jesce Sole), Pugliese, Calabrese and Sicilian chants.

Alessandra Belloni is the only woman in America (and in Italy) who uses this powerful tambourine style combined with the singing and dancing, and she’s very proud to be able to bring this ancient healing women tradition back to life.

She’s also a REMO Artist, with her own line of signature series tambourines made by REMO.

The purpose of this workshop is to introduce general audiences to a very rich tambourine and folk dance culture with an active current performance practice in Southern Italy and also to bring women back in touch with their lost tradition of drumming tradition.

During these series of workshops, the participants will learn:

* The basic technique of holding the drum, with emphasis on arm movement, wrist and elbow technique, which requires a lot of strength, to create the bouncing sound of the triplets.

* Hand technique with the palm and the fingertips in both a basic and
accented fast 6/8 rhythm.

* Tammorriata a 4/4 rhythm played on the large drum called the Tammorra, originally from Naples with a strong African influence in the rhythm.

The Tammorriata is an improvisation of drumming and singing, and it is danced during the rituals held in the summer in honor of the Black Madonna (originally ancient rites for the Earth Goddess Cybele) 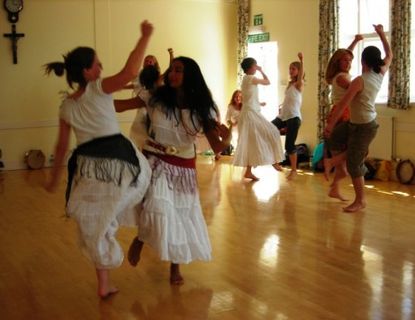 TAMMORRIATA: This elegant and sensual dance from Naples is performed by couples playing castanets to the rhythm of the large drum, called the Tammorra. The dance movements have a strong Spanish and Middle Eastern flourish, with many recognizable movements of the Flamenco and Belly Dance traditions. These movements are set to the beat of African 4/4 rhythms. The Tammorriata is based upon an improvisational style of drumming and singing usually enacted during the summer rituals in honor of the ancient Earth Goddess Cybele, and later, the Black Madonna.

TARANTELLA DE’ 600: This is a Renaissance folk dance which is done in pairs which is very popular in Italy and throughout the Mediterranean. It contains both fast, energetic steps and combined arm and leg movements which improve coordination. This invigorating dance had been called by Alessandra’s students ‘Italian Aerobics”.

*DANCE AND RHYTHM OF SAN ROCCO: a healing trance 6/8 rhythm from Calabria done in honor of San Rocco to send away fear of death by the plague from the Medieval Times.

* Tarantella alla Montemaranese:  a carnival dance from Montemarano (Naples) played on the smaller tambourines with a very unusual syncopation on the 6/8. This rite of Carnival dates back to the Roman celebrations in honor Bacchus, the god of wine.

* Pizzica Tarantata: a very fast 6/8 rhythm from Puglia, with different accents - which originated as music therapy to cure the mythical bite of the tarantula. This wild rhythm, played mainly by women on medium size tambourines with a double row of jingles and the dance were performed as a musical exorcism to cure a mental disease called tarantismo, which afflicted mainly women (tarantate), who fell into a hypnotic state of mind, and in a trance they frantically danced for days during the Summer Solstice. Originally these where the ancient Greek rites for the God Dyonisus as Puglia was part of Greece and was called Magna Grecia..

The length of the workshops should be 2 to 4 hours, divided into two parts.
The tambourines for the workshops can be made available through REMO