The Voyage of the Black Madonna 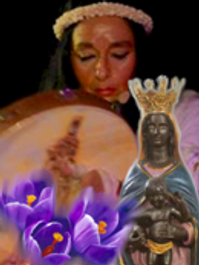 Internationally honored, singer, percussionist, healer, and director Alessandra Belloni,  joined by her Italian folk music/theater/dance company I Giullari di Piazza, presents "The Voyage of the Black  Madonna," a musical journey around the world to the ancient sacred sites of the Black Madonna.   This unique and impeccably researched  theater and dance work blends healing chants, dances and drumming in honor of the Black Madonna, created from authentic traditions of Southern Italy, Spain, France, Portugal, and Brazil, along with original compositions.

Belloni and her troupe of dancers, actors, and musicians, all specialists in Southern Italian traditions, will take audiences on an enchanting journey of discovery of the 7 Black Madonnas, known as the "Seven Sisters" in Southern Italy.  This trip into traditional legends, miracles, and history, transports audiences to a time and place where an unbroken and ancient tradition continues with processions, drumming rituals, chanting and sensual dancing in honor of the Black Madonna, who is considered the most important of the 7 sisters.   She continues to be venerated on a high sacred mountain, where pilgrims still make the trip up the mountain, barefoot while chanting and drumming in her honor.

Alessandra Belloni, tambourine virtuoso, singer, ritual dancer, pioneering scholar, teacher and Shamanic healer connects in an unbroken lineage to the primordial Great Mother, or the Black Madonna.  The healing power of medieval prayers to the Madonna originated in the Middle Ages, during the Black Death Plague, and was believed to release people from their overpowering fears of death and the annihilation of their way of life.

The dancing evokes the elegant and meditative movements of the Whirling Dervishes and is accompanied by song in the procession that follows the Black Madonna.   Following the Neapolitan tradition, the company will perform the chant for the Black Madonna of Montevergine, followed by the Tammprita drumming and sensual dance. 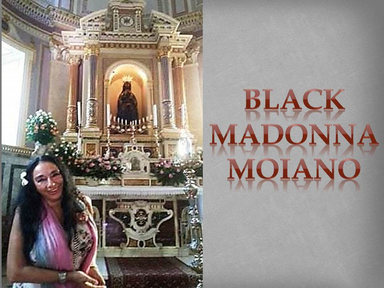 The full-length Voyage of the Black Madonna, written by Alessandra Belloni and premiered at the Cathedral of St. John the Divine in 1991, has been performed since then at numerous festivals and venues, including the Los Angeles Sacred Music Festival, the New York Open Center, and Glastonbury Goddess Festival.   The work includes rare chants that have never been heard outside of the live ceremonies in Italy, and has now been recorded on a few of I Giullari di Piazza's CDs, including Earth, Sun and Moon, Tarantata - Dance of the Ancient Spider (Sounds True), Tarantelle and Canti d'Amore, Tarantella Spider Dance.

SHARON LIVARDO: as the Black Madonna and her newborn son Enzo Dumaine as Baby Jesus

6-year old LUISA FOCELLA :as the little girl saved by the Black Madonna 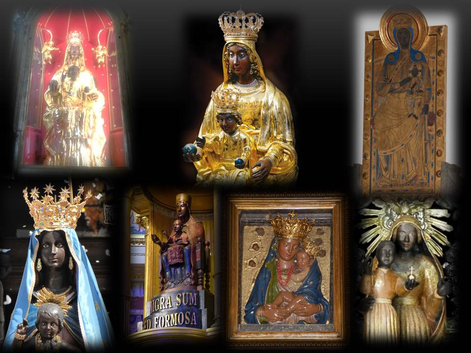 In ancient times, Southern Italy was part of Greece and was called Magna Graecia. Here, worship of the Mother Earth Goddess (Cybele/Demeter/Gaia) was predominant, and connected to a strong matriarchal society. There is a vestige of this tradition today in the worship of the Black Madonna.  The old Southern Italian peasant women, who work closely with the earth, and whose ancient faces recall that matriarchal society, still chant and drum in honor of the Great Mother.

Their drumming tradition is a direct continuation of the ancient rites for the goddesses of the earth, the moon, the sea, and love.   In her research, Alessandra found that the Italian frame drum, "tamburello," is an ancient musical instrument connected to rituals often associated with women, dating back to the ancient Egyptian and Sumerian cultures. In Magna Grecia (now Southern Italy) and the Middle East, women used the frame drums for rituals honoring the Moon Goddess.

In Rome, women priestesses played the tambourine in rituals honoring Dionysus and Cybele. This instrument is still used today in Italy to accompany the authentic Tarantella (originated as music and dance therapy) and the Tammorriata, the sensual dance of fertility rites, now performed in honor of the Black Madonna.